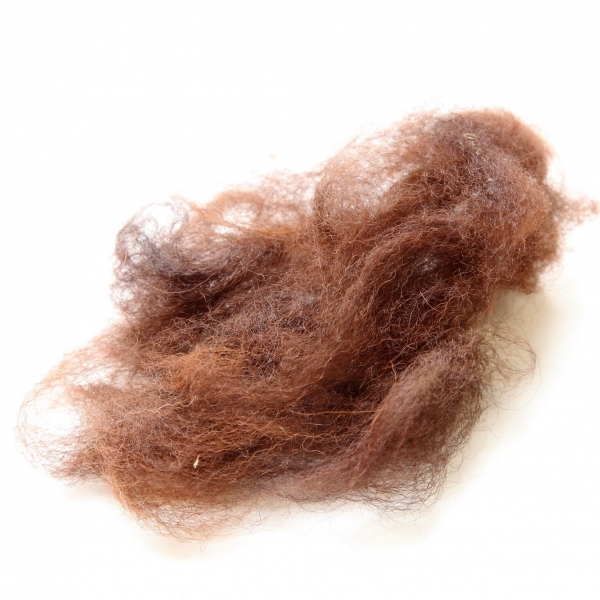 This luxuriously soft and silky bundle is made of the sheered fleece of an alpaca, a llama-like animal native to South America. The jar contains two samples, collected during our felting and hand-embroidery workshop; the raw and unspun alpaca wool which is similar in form to how it comes off the animal, and a ball formed by wet felting alpaca wool, a process which agitates the fibres in the presence of water and soap, causing them to entangle into an invitingly fluffy mass. The technique of felting owes thanks to the surface structure of the fibres. If you were to look at these fibres through a microscope, you’d see a coating of tiny overlapping scales, like slate tiles on a roof. Felting happens because these scales become roughed up and disorderly, and they interlock with those from adjacent fibres when they are physically agitated together. This causes the fleece to become matted into felt. A similar scaly structure can be found on the surface of sheep’s wool, and even human hair; backcombing achieves a similar felted effect. Beyond felting, the preparation of alpaca wool for use in yarn-based textiles is similar to that of sheep’s wool. First the fleece is cleaned of dirt and debris, and then detangled by a process called carding. This is where the fibres are brushed between two metallic bristly cards – a bit like hair brushes – which organises and aligns the fibres. These freshly-tamed fibres may then be spun into yarn and dyed, although their natural colours are themselves a beautiful rainbow of white, caramel, sand, terracotta, silver, chocolate brown and black hues. Finally, the yarns can be knitted, crocheted or woven into textiles. Alpaca fibres differ from sheep’s wool in that some areas of the interior are hollow. This makes alpaca wool cosily insulating and warmer to wear than sheep’s wool, even when wet. Alpaca wool has no lanolin – the greasy substance which coats sheep’s wool – making alpaca wool hypoallergenic, and the fibres are generally stronger and glossier than those of sheep’s wool. The alpaca has been bred to produce very fine fibres, akin to luxury merino wool. It was this combination of marvellous materials properties which gave alpaca wool the nickname “The Fibre of the Gods”. Historical evidence suggests that the alpaca was domesticated by Andean populations in South America over 6000 years ago. Before the Inca Empire (1438 – 1533 AD), alpacas were kept for food and clothing, but it was the Incas who truly made their mark on this super fibre; they used systematic breeding programs to control colour and fleece characteristics and developed a colourful kaleidoscope of natural dyes. For the Incas, woven fabrics were not just used for functional clothing and household textiles, but as a medium for pictorial storytelling, passing legend and mythology down the generations. Alpaca fibre cloth was central to Inca culture and economy, with a plethora of uses from currency to religious sacrifice, citizen identification and as a symbol of societal ranking. In the mid-16th Century, the invading Spanish Conquistadors drove the Inca people – as well as the alpaca – almost to extinction, but surviving indigenous breeders brought them back from the brink. Despite these historical hurdles, today natural fibres like alpaca wool are enjoying a resurgence, and the alpaca fibre industry is protected and thriving. The alpaca remains the primary income source – as well as an important emblem of history and tradition – for thousands of families in Peru, Bolivia, Ecuador and Chile.